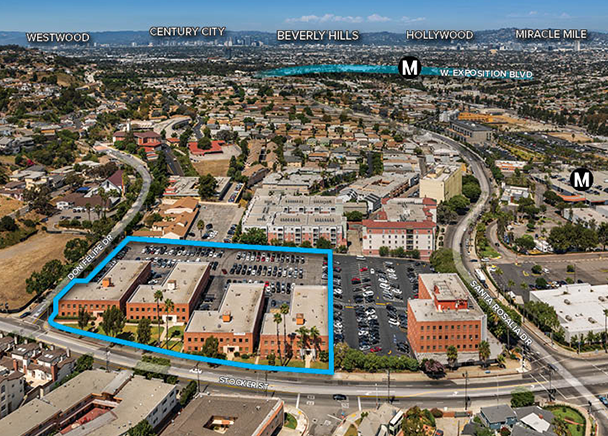 CBRE announced the sale of a 3.27-acre redevelopment site in Los Angeles to 4S Bay Partners, LLC, a Chicago-based family office, for $35 million. Laurie Lustig-Bower and Kamran Paydar of CBRE represented the seller, David J. Shophet of Sharp Capital, and David M. Shaaya of One Cole Group. The buyer, 4S Bay Partners, LLC, was represented by James Daughrity of Daughrity Real Estate. The property at 3731-3761 W. Stocker Street is located in a designated Opportunity Zone with a Transit Oriented Development (TOC) Tier III designation. The site contains four two-story office structures, totaling about 80,000 square feet, built in 1954. The buildings are more than 90 percent occupied by a variety of LA County and City community services-oriented tenants. The property is in proximity to the planned Metro Crenshaw/LAX light rail transit line. “The buyer intends to occupy a portion of the existing office space to accommodate their growth requirements related to their social impact and economic development initiatives and to support their commitment to the community,” said Lustig-Bower. "Part of the site is being considered for potential redevelopment projects such as a film studio, entertainment campus, and community business incubator to support the buyer’s economic development focus within the Baldwin Hills/Crenshaw community.” CBRE Press Release Initially, the offering entailed only two of the site’s buildings, but it quickly became apparent that many buyers were more interested in the larger assemblage encompassing all four buildings, according to Paydar. 4S Bay focuses on humanitarian causes, such as educational opportunities, economic improvement, human rights, wellness and environmental sustainability. "As social impact investors, we are excited about this opportunity to support our primary mission to invest in communities of color and to drive new economic investment into the Baldwin Hills/Crenshaw community," said Jim Casselberry, chief investment officer at 4S Bay Partners. Added Daughrity, “The buyer is very familiar with the area and had been looking for more than a year for the ideal development site to build economic value within our community.” The seller acquired the property in 2017, attracted to its redevelopment potential. “Our plans were to sell a portion of the site and keep the remainder for redevelopment,” said Shaaya. “Ultimately, strong buyer interest led us to a new business plan for selling the entire property.” Added Shophet, “Baldwin Hills/Crenshaw is a transforming neighborhood that continues to attract new investment. We stand behind the buyers and their economic vision for the property and community”

Fill out my online form.
We care about the protection of your data. Read our Privacy Policy.

Fill out our form and a representative will be in touch to schedule your free real estate consultation with one our experts.
Fill out my online form.
Free Consultation